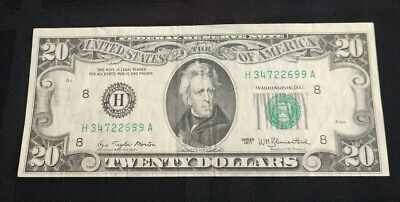 Paper money was changed to its current size in 1928. Collectors call modern money “small size” notes. Most of these bills are common. However, there are some very rare exceptions. Most rare notes are a special designation known as star notes. Star notes have a star symbol at the beginning or end of the serial number. If money was misprinted while at the Bureau of Engraving and Printing (BEP), and the error was caught by BEP employees, then the misprinted money was replaced with star notes. The star notes are printed ahead of time and they are put into circulation to replace the misprints. Our guide shows you some of the rarer star notes that you are likely to encounter.

These notes were printed for the $1, $2, $5, and $100 denomination. The hands down rarest red seal star note is the series of 1928B $2 legal tender. Another rare and popular note is the 1928 $1 legal tender. 1966 $100 red seal stars were also printed for the star variety. They aren’t necessarily rare, but they are popular. Red seals are a popular type of paper money because they seem very foreign and exotic to the casual observer.
There are also lots of common red seal star notes. Two and five dollar red seals from 1953 and 1963 are extremely common even as a star variety. Any red seal paper money star from 1928 should be inspected closely. There are rare types from that year that we have not listed. Send us pictures of anything from 1928 in order to get a free appraisal.

99% of silver certificate star notes are common. We have the few exceptions listed below. Any $1 note from 1928C, 1928D, or 1928E is very rare as a star note (and as a non-star for that matter). The ultra-rarity from the series is the 1933 $10 silver certificate star note. The 1934B $10 star looks similar and it is also a rarity; but it does not even compare to 1933 in terms of value. 1953B $5 silver certificate stars are very rare, and those are actually still frequently available.
There are no star notes from 1935 or 1957 that are going to be rare. Most $1 silver certificates from those year are worth about $5 as the star variety. However, anything from 1928 or 1934 should at least be examined by an expert. There are some varieties within each series that can make something otherwise common be very rare. Condition is still very important when dealing with any star notes.

The United States only prints Federal Reserve notes today. The small size types were first printed in 1928. Some notes from 1928 can be very rare (especially $500 and $1,000 star notes). In fact, no matter what the denomination or condition is, we would strongly encourage you to send us pictures of any 1928 star notes. High grade specimens or low serial numbers (under 100) could be worth over $1,000.
We pictured star notes from 1934 above. There are five different series to 1934: 1934, 1934A, 1934B, 1934C, and 1934D. Most star notes from this series are fairly common; although there are exceptions. Some of the star print runs were very small, which makes some of them very rare.

There were four types of gold certificate stars printed in 1928. Those are $10, $20, $50 and $100 stars. The two lower denominations are relatively common. However, $50 and $100 gold stars are rare. Any denomination in a grade above AU is a good find. Once again, any serial numbers below 100 will also trade for a nice premium. We are especially interested in these notes. Please say hello if you have one.

Some of the most popular small size star notes were printed during WWII to be used by troops in Hawaii and North Africa. The Hawaii issues have brown seals and the North Africa issues have yellow seals (and blue overprints). The standout rarity from the group is the series of 1934 $10 North Africa star. Don’t confuse it with the much more common series of 1934A star.
We also pictured a $20 Hawaii star. Twenty dollar and five dollar stars from Hawaii have the chance to be rare. Contact us for details. Other stars from the series can absolutely be valuable. They just have to be high grade. We would love to see pictures of any star notes you have.