Nick Willis appears to be getting better with age.

The 36-year-old runner added to his legendary career with a record-breaking fifth victory at the New Balance 5th Avenue Mile Sunday in New York City.

Willis pulled out the victory with a time of 3-minutes,51.7-seconds in a photo-finish race. 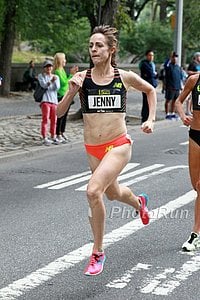 The former University of Michigan runner and 2-time Olympic medalist has now claimed the men’s title five times, with victories in 2008, 2013, 2015 and 2017 and 2019, placing the New Zealand native alone atop the men’s division in the history books.

On the women’s side of the event, Jenny Simpson of Webster City, Iowa, claimed her seventh title in a row and eighth overall in 4:16.1 on Sunday.

The New Balance 5th Avenue Mile race began in 1981 -- two years before Willis was born -- and overtime has become one of the world’s premier mile races.

Set a new personal record for a mile!

Challenge Ended: September 9, 2018
When's the last time you gave it your all for one mile? Whether you're into the adrenaline of speed or the zen of distance running, challenge yourself to run your best mile in this virtual race, wherever you love to run.
Coinciding with the iconic New Balance 5th Avenue Mile on September 9, in which thousands of runners will dash down a beautiful 20-block stretch of New York City, this is your chance to join the competition virtually from anywhere in the world.
Throughout the race window, go for your fastest mile, and then try to beat your time on the leaderboard. And if you're planning to be in New York City on September 9, sign up for the in-person New Balance 5th Avenue Mile, too -- you can make your mile count toward that race, as well as the virtual race.
It's a test of mental toughness. So focus, put your whole heart into it, and set a new personal record.
Register for this virtual race with our friends over at New York Road Runners on their site or in the NYRR app. Please note: Upon uploading your results, you must tag the activity as a Race for Strava to count the fastest time you ran that distance and mark the race complete.
Share photos and videos from your virtual race and we may feature you in the NBC Sports broadcast of the New Balance 5th Avenue Mile on September 9!
All you have to do is register for and run the virtual race, and then share a photo or video on Instagram and/or Twitter using the hashtags #NB5thAveMileBroadcast and #NYRRVirtualRacing between September 1 and September 8. Read the terms and conditions.
We'd love to see photos and videos that include both you and your surroundings from during your run-whether that's through Hyde Park in London, along Leblon Beach in Rio de Janeiro, or beside the Kamogawa River in Kyoto. Show us your beautiful mile, wherever it may be!