Rise Above: 24 Black Flag Songs to Benefit the West Memphis Three is a 2002 tribute album. The album consists of covers of Black Flag songs performed by the Rollins Band, with vocalists from various well-known rock, hip hop, punk and metal artists (as well as certain members of Black Flag) singing. The Rollins Band recorded twenty-four Black Flag songs with guest musicians such as Iggy Pop and Chuck D in aid of the West Memphis Three: three teenagers who were falsely accused of murder in the early ’90s. Recently, thanks to new evidence, the three were released after spending eighteen years behind bars. Black Flag worked insanely hard.

The story of the West Memphis 3 is the kind of perversion of justice that fuels East and West Coast natives&#146; nightmares about finding themselves trapped in &#147;flyover country.&#148; Three teenagers, one of them mentally handicapped, sentenced to life in prison for the savage murders of three children. Evidence? Well, the three teenagers dressed in lots of black and they listened to that awful, Satanic heavy metal music. Isn&#146;t that enough? It was for an Arkansas jury. There have been two HBO documentaries on the case, the first of which laid out in detail the injustice that was done, and the second of which all but pointed to a much more logical suspect. There&#146;s also a website which offers updates on the boys&#146; appeals and accepts donations to their defense fund. And now there&#146;s this record. 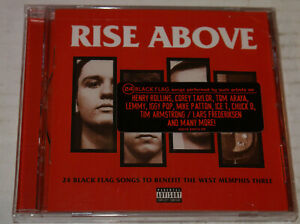 In the liner notes, former Black Flag vocalist Henry Rollins says he became aware of the case by seeing the films. His idea was to raise money by re-recording an album of cover versions of Black Flag songs, using his current band for the backing music and recruiting a wide array of guest vocalists. The result is a record that would be worth buying even if it wasn&#146;t one of the best rock releases of 2002.

Black Flag&#146;s music, particularly in the band&#146;s early years, boiled frustration, paranoia and rage down into a tightly wound package of pure energy. Explosively powerful, their cheaply recorded singles and EPs, and their first album Damaged, made the rest of their punk rock contemporaries seem weak and dithering. That this raging, assaultive music could come out of Southern California&#146;s languid suburbs and beach communities was even more shocking. Band founder and guitarist Greg Ginn was a sonic pioneer, playing riffs so distorted and ugly they seemed like mistakes, only they kept happening over and over again, pushing the band&#146;s 90-second songs forward to the cliff&#146;s edge and over, and screaming all the way to the ground. His lyrics were equally caustic, filled with black humor and plainspoken mantras of nihilistic boredom-become-fury. One of Rise Above’s best performances is Hank Williams III&#146;s take on &#147;No Values,&#148; with its lines &#147;I&#146;ll get satisfaction/When I destroy everything you&#146;ve built.&#148;

Many of the performers here have demonstrated a loyalty to the punk aesthetic over the years, even those who come from other genres, and the songs they&#146;re assigned are mostly perfect matches. Rapper (and sometime metal vocalist) Ice-T shows up to cover &#147;Police Story,&#148; howling &#147;Understand/We&#146;re fighting a war we can&#146;t win/They hate us, we hate them/We can&#146;t win.&#148; Slayer singer Tom Araya delivers a harsher vocal than his usual, somewhat stylized metal bark on &#147;Revenge.&#148; Mot�rhead&#146;s Lemmy, a legendary drinker, sings &#147;Thirsty & Miserable.&#148; Iggy Pop sings &#147;Fix Me.&#148; Rollins himself sings on seven tracks, choosing mostly material from the band&#146;s later, more directly metal-influenced period. Thus, his tracks run five or even six minutes, compared with the 60- and 90-second (and, in many cases, more powerful) attacks of the guest vocalists. The acrimony of Black Flag&#146;s 1986 disintegration gives an extra kick to hearing him roar the old songs one more time.

Musically, this is a tight, angry album. Mother Superior, the blues-rock power trio who also serve as the Rollins Band these days, delivers ferocious performances that are slightly heavier than the originals, as befits their own backgrounds. Guitarist Jim Wilson reverently follows Greg Ginn&#146;s twisted riffs, but cleans them up just a little, to bring them a half-step closer to contemporary hard rock/metal standards. This combination of old-school sonic anarchy and studio polish results in one of the most potent and punishing albums of recent years. And you can&#146;t dispute the worthiness of the cause.