We’ve come to the end of our summer trip back through the first season of David Milch’s epic revisionist Western “Deadwood,” and we’re continuing to do it with two separate but largely identical posts: one for people who watched the whole series and want to be able to discuss it from beginning to end, and one for people who are just starting out and don’t want to be spoiled with discussion that goes past the current episode. This is the latter; click here for the veteran-friendly version.

A review of the season finale, “Sold Under Sin,” coming up just as soon as I report stiffness or numbness…

“I’ll be the fucking sheriff.” -Seth

Because of David Milch’s improvisational writing style, where he’s constantly rewriting, sometimes right up until the cameras roll, his work often has a tendency to start out stronger than it finishes. “NYPD Blue” was particularly notorious for doing story arcs that opened with a bang and went out with a confusing whimper, and the final season of “Deadwood” was filled with story ideas that never seemed to go anywhere.(*)

(*) As I’ve said, the last episode functions much better as an unintentional series finale than it does as a season finale.

This first season of “Deadwood,” though? It ends pretty fantastically.

“Sold Under Sin” doesn’t feel like one of those “Wire” finales where every single idea introduced in the premiere pays off, but it does offer compelling resolution to a number of ideas introduced throughout the season.

The series begins with Seth Bullock carrying out what he believes will be his final act as a lawman, pinning his badge on another man while he and Sol head out of town. And it ends with him reluctantly producing the tin for Swearengen and agreeing to serve as the camp’s first real sheriff, as opposed to the easily-bought Con Stapleton. (Seth has less use for half a can of bacon grease than does Con.) Earlier in the episode, Seth goes to Dan Dority and strongly suggests that Dan and Al make sure Otis Russell doesn’t leave the camp alive. He tries to hide it behind hypocritical rhetoric(**), but he’s putting himself right on the same level with these criminals he so despises. In the end, though, he comes to his senses, arranges for General Crook to escort the battered Otis safely out of town and takes the job he doesn’t want but knows the camp needs him to take.

(**) I couldn’t help but notice the parallel between Seth’s conversation with Dan and Doc Cochran asking Al to take Reverend Smith into the Gem. Earlier in that discussion, Doc insists he doesn’t want Al to euthanize Smith, but knowing Al the way he does, does he honestly expect anything other than what Al ultimately does to/for Smith?

And in going to Crook and committing himself to the side of law and righteousness, Seth is able to feel just good enough about himself that he can finally give in to his adulterous lust for the widow Garret, who’s been waiting for Mr. Bullock to help her out of her mourning clothes for a while now. Seth still has his temper to keep in check, and Alma has a complicated gold claim to work, not to mention the specter of her father reaching out to Brom’s family (assuming he quite recovers from the beatdown Seth laid on him at the Bella Union). But they’ve been circling each other for a while even while working through their own problems(***), and now that’s settled – at least until Seth’s wife and stepson make it to the camp.

(***) Ian McShane is the star of the season and this episode, but Molly Parker is awfully good in that scene where Otis bluntly tells Alma that she’s going to bail him out again and that he won’t agree to any of her conditions. If he’s not as big a bastard as Joanie’s father, he’s certainly a man who deserved the beating Seth gave him (and more), and Parker did a good job of showing just how on guard Alma had been to that point, and then how she looked once she couldn’t maintain the facade any longer.

And Al spends the episode dealing with what feels like several season’s worth of problems: E.B.’s oversensitive ego, the murder warrant and the question of Adams’ loyalty, Wu understandably upset that Cy paid the sheriff to murder one of his people as part of a real estate move, and, of course, the end of Reverend Smith’s suffering.

It’s that last part that always, always, always gets me. Not only are the performances by McShane, Ray McKinnon and Brad Dourif fantastic, but Milch and company have laid all the groundwork expertly. We know and like Smith, we possibly like the Doc even more, we’ve seen that Al has good qualities to go alongside his homicidal ones – and in this case, the two sides are forced to work together – and have also been reminded several times that Smith reminds him of his eplieptic brother. (Suffice it to say, it gets awfully dusty around me whenever I hear Al tell Smith, “You can go now, brother.”) The death sequence itself – first Doc praying to God and quoting the words of the dying men he treated in the Civil War, then Al euthanizing Smith while matter-of-factly giving tips on smothering to Johnny – is as powerful as any the show has done to this point, or would do in the future.

And that murder is so much of what the show is about. Smith is a respected, popular community figure, and one whose suffering has become very, very public. Whether Doc intends for Al to kill him or not, Al is doing a kindness – not only to Smith, but to Doc, and Seth and Sol and everyone else who’s enjoyed the reverend’s company and aches to see him like this. Al has gone from an apparent black hat(*****) to at least as admirable a figure as Seth, and he comes without the complicated emotional baggage. (Where Seth sometimes acts without thinking, or without understanding why he’s doing what he’s doing, Al always acts with full self-awareness.)

(*****) Albeit one who never wears a hat, and only occasionally puts on a shirt.

In the show’s worldview, ending Smith’s suffering – even with an act that the law would consider murder – is as much to the public good as when Al organized plans to deal with the smallpox plague. This is a show about how civilizations come together out of chaos. Sometimes, big steps are taken through dialogue or negotiation, but sometimes people have to get their hands bloody, and then agree upon the lie they’ll tell history about what happened. 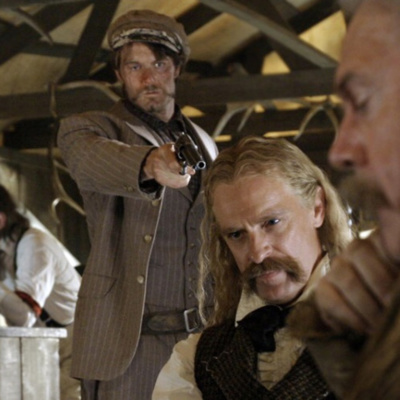 Not every story and/or character paid off, of course. Joanie’s search for an outside gig is still up in the air, and will now have to continue without in-person involvement from Eddie, since Ricky Jay left the cast abruptly after the season ended. 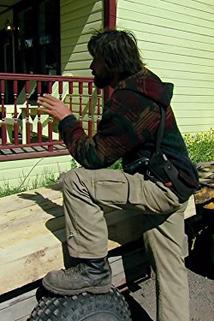 Good work by Peter Coyote as General Crook, whose patience for the likes of E.B. and Merrick was understandably as short as his empathy for Seth was long.

Amateur move, Claggett, telling a roomful of men – at least half, if not all, with designs on killing you – that you have the one thing they want most on your person. (Though even in the low-tech 1870s, would destroying that piece of paper really solve all of Al’s problems?)

No Sol/Trixie interaction this week (meaning Sol spent 11 episodes out of 12 simply playing wingman for Seth), but Al’s actions with Smith seem to have thawed relationships between Al and “that other one.”

Lord, so much of this show is quotable. I’m particularly fond of Claggett telling Al, on the subject of violence to his person, “Those are the days behind us,” to which Al nods at Dan and says, “No, those are the days off to my fucking left.”

There’s enough ambivalence to the implications of what Seth and Alma are doing (Seth’s wife and stepson, Alma pushing Trixie back to the Gem, etc.) that that story doesn’t feel entirely like a happy ending, so our one moment of pure uplift comes from Jewel getting an incredibly drunk Doc to dance with her and her new boot.

The hour’s also a great showcase for Brad Dourif, from the howling outrage of Doc’s “Oh, fuck you, Al!” to his Milch-ian monologue about the dying boys from the war.

Sofia winds up very well cared-for by blonde whores, does she not?

Know Your Milch-isms: “Announcing your plans is a good way to hear God laugh” is a sentiment uttered (with the words in various orders) by many Milch characters (here Al to the Doc), and unsurprisingly by Milch himself. When you make TV the way he does, plans will only get you so far.

So that’s it for this summer. First, I want to thank Jim Beaver for his tremendous contributions every week in the veteran comments. I didn’t ask; Jim just showed up and started offering memories of the production of each episode that were so rich that I began to think of the reviews themselves as a Beaver comment delivery system. Ellsworth isn’t in the finale, and Jim had other matters to concern himself with around the time it was being filmed, so I don’t know if he’ll have any insight to offer here. Nonetheless, it’s been great having him around all summer, and if you want to read more of his writing, Amazon’s currently selling his memoir “Life’s That Way” for only $6.

As I mentioned at the start of this latest rewind project, my original blog only came into existence in time for the third season, and you can read all of those reviews there. (A few of the reviews are brief, and I missed a couple of episodes because of press tour, but I got to as much as I could at the time.) I tend to be OCD about this stuff, so with reviews of season 1 and 3 in the bag, I feel confident that season 2 will be on the agenda for next summer, and I hope to have Jim and the rest of you smart people back to talk about it. (Maybe I’ll try to recruit Stephen Tobolowsky to pop up at some point to discuss baths.)

I haven’t seen most of these episodes in the seven years since they first aired on HBO, and it was a tremendous pleasure to be able to revisit them, and also to introduce them to those among you visiting fuckin’ Deadwood for the first time.

What did everybody else think?

Alan Sepinwall may be reached at [email protected]

Please check your email once you paid, in order to see which payments description you can expect on your statement.
* Subscription
*** Files will be deleted after 60 days since last download

We guarantee 100% satisfaction with our services.
Otherwise, our office support solve all of your questions.