Isaiah Rashad has been lurking in the shadows of the Top Dawg Entertainment roster for the past few years, lurking in a good way. Rashad, SZA and the most recent signee Lance Skiiiwalker aren't quite as well known as the rest of the TDE roster, however those who had their ears graced by Rashad's first TDE project 'Cilvia Demo' knew that Rashad would explode at some point with his typically mellow raps.

The Sun’s Tirade is Isaiah Rashad’s debut studio album. Scheduled to release on September 2nd, 2016 through Top Dawg Entertainment, this serves as a follow-up to his 2014 EP, Cilvia Demo.

Hailing from Chattanooga, Tennesse and not the West Coast, Rashad adds a unique perspective and vibe to TDE and hip hop in general which is what I love about TDE. Through his absence, Rashad battled demons with addiction and what not along with the usual context of a young man coming to grips with success which the founding members of TDE have all experienced. 'The Sun's Tirade' sees Rashad make his much anticipated return and boy does he offer some funk, once again offering up some Southern flavour to the music game.

where u at? - demanding homies.
4r Da Squaw - Dreamy, anti-rap.
Free Lunch - Hip hop lullaby ('real niggas in my condom').
Rope // rosegold ft. SiR - Two for the price of one, each as good as the other.
Wat's Wrong ft Zacari & Kendrick Lamar - TDE has Rashad legit combining with Kdot on a spiritual banger.
Park -Humble brag, in his unique way.
Bday ft. Deacon Blues & Kari Faux - Poetry don't even need to rhyme.
Slikk da Shocka ft. Syd - 'You let me put the weed in your blunt'.
Titty And Dolla ft. Hugh Augustine & Jay Rock - Quicker tempo showing off Rashahd's versatility.
Stuck in the Mud ft. SZA - What use are material items if they're stuck in the mud?
A lot - Keepin' it G.
AA - 'Thank god I got my bank, where I keep my heart inside'.
Dressed Like Rappers - All them vices
Don't Matter - How about the funky drum pattern!?
Brenda - Southern tempo with some quirks.
by george (outro) - Inside the mind.
Find a Topic (homies begged) - 'I guess we're back to talkin' shit again, very riveting'

Rashad's work is highly introspective and while there are happy, chirpy moments on 'The Sun's Tirade' this album doesn't differ too much from the general vibe that we enjoyed of 'Cilvia Demo'. There's elements of this album that made me feel like Rashad has come up with a new sub-genre of hip hop as it's perfect for a lazy Sunday, especially as Rashad doesn't necessarily serve up your standard bars, more leaning towards the freedom of poetry.

There are dark moments on this album but they come with Rashad adding his own twist on social commentary and the creativity involved tends to not leave you down in the dumps about everything. Take 'Rope // rosegold' for example where Rashad croons...

'When I'm sober I might testify, that this world has fallen out of place'.

It's always a fine line and Rashad walks the depressing/uplifting tight-rope to near perfection. 'AA' has Rashad offering up another pearl that causes your brain to kick into overdrive...

'Thank god I got a bank, where I keep my heart inside and I keep it far away from all these hoes and flashin' lights'

'Dressed Like Rappers' is also a great example of Rashad's unique delivery as he relies less on the standard rhyme pattern or flow, serving up a bunch of lines that all tangle together beautifully...

I can admit
I've been depressed, I hit a wall, ouch
I hit the bank, you hit the dab
I hit the ball, out
Praying God pay my cable
Splurging out one more favor
Little boys dressed like rappers
Can that road make them daddies?
I talked to God
I got approved, I got a lifeline
If I should die
While I'm awake, I had a nice time

The overall vibe is one of reflection, delivered in a highly enjoyable package. The way Rashad raps and delivers 'hooks' or just a couple of lines of poetry, ensures that this is an easy listen as his vocals ride the wave of some tricky music to control.

To try and box Rashad's music is incredibly difficult and I feel like any sort of description I offer will be restricting what is a very broad sound. Rashad's music is mellow, however it will still have you nodding along and there's everything from hard-hitting Southern drums to the borderline English garage tempo offered on 'Don't Matter'.

There's a wide variety of producers credited, too many to offer one collective sound however they all offer make each song a bit different and provide Rashad with a platform from which he can freely express himself. Producers credited are; Dave Free (where you been Isaiah!?), FrancisGotHeat, Cam O'bi, J. LBS., The Antydote, D. Sanders, Al B. Smoov, Park Ave., Tiggi, Deacon Blues, Steve Lacy, Crooklin, Pops, Mike Will Made It, Pluss, DZONYBEATS, DK The Punisher, Carter Lang, Calor, Jowin, Free P.

If I had to pick a production highlight, it would be Steve Lacy's contribution on 'Slikk da Shocka' which about as anti-rap as it gets. This does however give Rashad some production that only he can really flex all over and it's a thing of beauty.

In terms of features; SiR, Zacari, Kendrick Lamar, Deacon Blues, Kari Faux, Syd, Hugh Augustine, Jay Rock and SZA all get featured. All the features are excellent and range from SZA and Syd adding some vocals to Kedrick Lamar gracing 'Wat's Wrong' with a verse that requires numerous listenings and a high-powered brain.

In broad terms, this is yet another home run for TDE as Rashad serves up a piece of musical wizardry that only he could. Rashad's work might not be for everyone as to really embed yourself in this album, you need to accept that you might not feel upbeat or happy when listening to his jams. However, it can be played in the background of whatever your doing and you'll have some mellow rap tunes to set a vibe whether cruising in your Toyota C-Rolla or just loungin'. 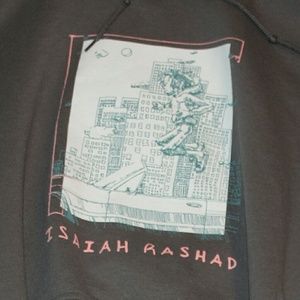 For those who do want to dive into 'The Sun's Tirade' that little bit more - enjoy the ride. Rashad ensures that you're constantly heading in a slightly different direction with each song and you're going to be treated to someone who is a mighty fine emcee, but perhaps a better poet.