The Tag Force games are unique within the realm of Yu-Gi-Oh! Rather than just slavishly adapt the television anime, they instead focus on a more social experience. As the name suggests, the emphasis is put on tag duels, where four players face off in teams of two.

Yu-Gi-Oh! GX Tag Force 2, known in Japan as Yu-Gi-Oh! Duel Monsters GX Tag Force 2 (遊☆戯☆王デュエルモンスターズGX タッグフォース), is a game based on the Yu-Gi-Oh! Animated series, developed by Konami and released for PlayStation Portable in September 2007. It's the second game in the Yu-Gi-Oh Tag Force series.[1][2]

Early in the game, after create a profile, the player will choose a duelist (main characters of the Yu-Gi-Oh! GX animation) to be his/her partner. The player must build a deck between 40 and 60 cards in order to duel.[1][3] The game include over 2800 cards.[4]

The player has the option of dueling solo, tag or just watching his partner. As the player wins duels, the partner's heart level increases.[3]

In Tag mode, the player duels with a partner.[3] The basic rules are the same as for single duels, both share life points, field and graveyard. The turn changes alternatively between players. Tag duels could not be done in the online battle.[2]

The player can also play minigames. There are a total of six minigames on the map. Minigames help to increase the partner's heart.[2][4]

It is a system used to unlock rare cards through other games in the Tag Force series. New cards can be got depending on the game title used in UMD recognition. In addition, at recognizing the past Tag Force games, will be unlock three special cards called 'Slifer the Sky Dragon', 'Obelisk the Tormentor', and 'The Winged Dragon of Ra'. Also will be available hidden packs for purchase.[1][4][3]

In general, the game received mixed reviews. In Metacritic, reached an average score of 60, based on 7 reviews.[5] Sam Bishop, from IGN, disapproved the the non-support to online multiplayer and also the difficulty for beginners.[1] Jeff Gedgaud, from Game Chronicles, wrote: 'Yu-Gi-Oh! GX Tag Force 2 is a game for the seasoned Yu-Gi-Oh! player and not for the faint of heart.'[6]

In a positive analysis, Salehuddin Husin, from GameAxis, cited some improvements, compared to the first game in the series, more animations and flashier graphics, rated 7.5.[3] 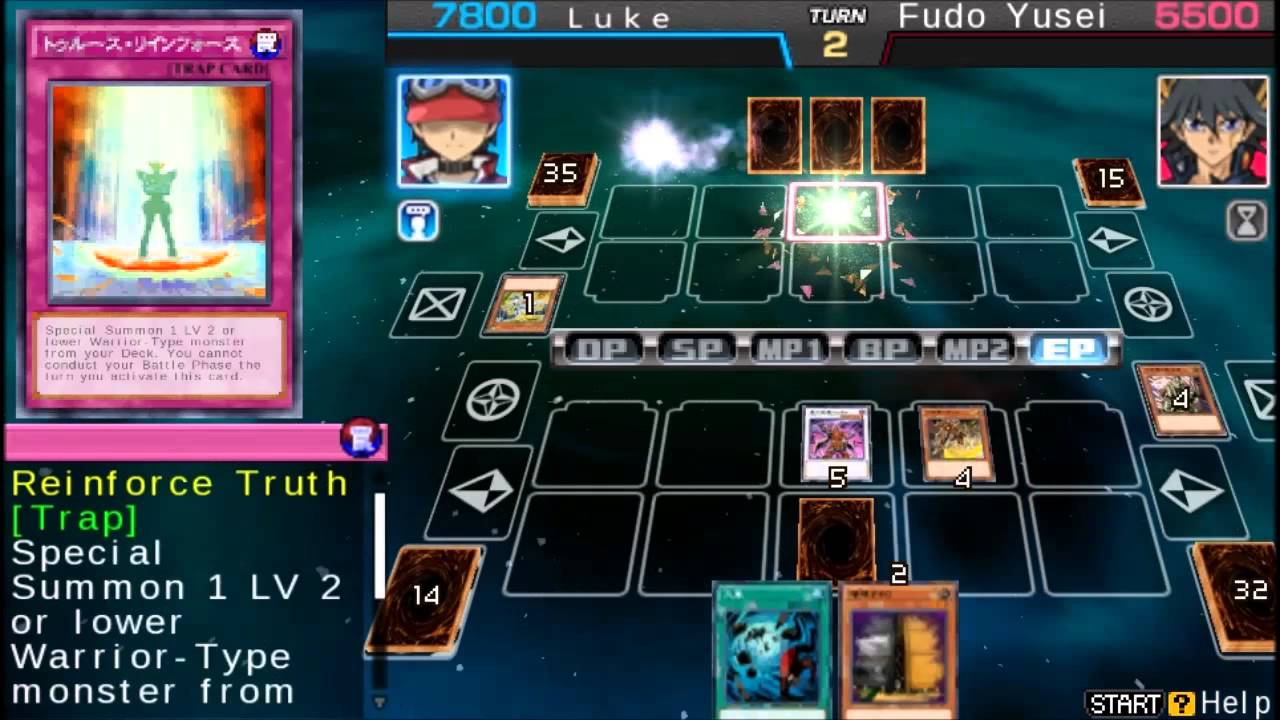 Retrieved from 'https://simple.wikipedia.org/w/index.php?title=Yu-Gi-Oh!_GX_Tag_Force_2&oldid=7166179'
This article is about the series of video games. For the first video game in the series, see Yu-Gi-Oh! GX Tag Force.

Yu-Gi-Oh! Tag Force is a series of video games based on the Yu-Gi-Oh! anime series.

A Tag Force game was released annually in Q3/Q4 of the year from 2006 to 2011. While no games in the series were released for several years, Yu-Gi-Oh! ARC-V Tag Force Special, the seventh game of the Tag Force series, was released in early 2015.

Like the Nintendo DS and GBA games, the Tag Force games involve free-roaming open worlds based on the settings they take place in (Duel Academy/New Domino City) and 'Free Duel' mode. Duels can be played in tag-team or single mode. Characters from the series the game is set in can be opponent's and stories. Also unlike the DS 5D's games, the Tag Force games do not have Turbo Duels.

In all Tag Force games, when activated Field Spell Cards are rendered in animated 3D based on their own artwork, unlike other Yu-Gi-Oh! games. The latest game, Tag Force Special, does not include this feature.

In the Japanese versions of the Tag Force games, all characters except cosplaying characters have voice performances while dueling.